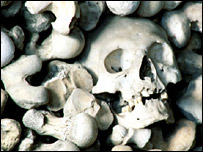 Europe’s “Little Ice Age” may have been triggered by the 14th Century Black Death plague, according to a new study.
Pollen and leaf data support the idea that millions of trees sprang up on abandoned farmland, soaking up carbon dioxide from the atmosphere.
This would have had the effect of cooling the climate, a team from Utrecht University, Netherlands, says.
From BBC NEWS This is a fascinating little theory. Although there are disagreements, it’s interesting to note a little lateral thought involved in interpreting the pollen count figures…

I play bass, I cook, I look out the window. Sometimes I prefer wondering what's out there to going out and looking. But not all the time. I only recently learned that leaving two spaces after a full stop is obsolete. View all posts by mysterioso